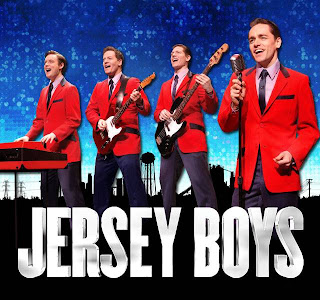 The prince Edward Theatre in London is located on Old Compton Street right in the heart of Soho, and is home to the current production of Jersey Boys, which currently shows Tuesdays to Sundays.
The prince Edward theatre has 3 main seating areas, the Orchestra Stalls, (main seating on the ground floor in front of the stage), The Dress Circle, and Grand Circle (being the highest part).
The theatre was designed by Edward A. Stone, and its first musical production of Rio Rita opened on 13 April 1930 .
The theatre has had many transitions and uses over the years; a dance and cabaret hall (named London Casino), a servicemans club, a cinema, and theatre.
In the 1970’s the theatre was acquired by Russian born impresario Bernard Delfont, and in 1978 it was converted and restored back into a theatre and the Musical Evita had its world premiere there which continued to run for 8 years. The theatre was re-built in 1990 by Bernard Delfont and Cameron Mackintosh and over the years followed some of the hit musicals including; Some like it hot, Crazy For You, Mamma Mia, West side story and Mary Poppins.
Mary Poppins ran for 4 years, and was one of the biggest musicals receiving 2 Olivier awards, namely - Best Actress in a Musical and the other for Best Theatre Choreography. It is a stage version of the well known 1960 film . A Broadway production followed in 2006 again receiving this time a Tony Award for Best Musical.
The current show, Jersey Boys has been running since 2008, and is a continued success for all those Frankie Valli fans. The musical is based on the lives of one of the most successful 1960s rock 'n roll groups, the Four Seasons. This new musical features their beloved hit songs "Sherry", "Big Girls Don't Cry", "Rag Doll", "Oh What a Night" and "Can't Take My Eyes Off of You" just to name a few.

The prince Edward theatre is easily accessible for all, and has many facilities, including a refurbished bar area in the dress circle, where audiences are able to walk out onto the balcony just as if it were a real Italian palazzo. There are facilities for disabled users and toilets located throughout.
The closest tube to Prince Edward Theatre London is Leicester Square and parking is available on Greek Street using parking meters.
Tagged as
Features