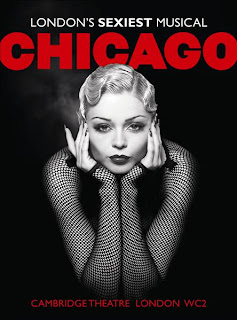 You may have seen the movie and may have visited the city, but have you seen Chicago The Musical in London? If your answer is yes, then great, go again, if your answer is no, then what are you waiting for!
Chicago The Musical is an award-winning, all-singing, all-dancing show: a great night of entertainment. The cast regularly welcomes guest stars from the worlds of TV, movies and music.

The musical is based on a story about a nightclub dancer called Roxie Hart, who is in prison for murdering her lover and trying to blame it on her unlucky husband, Amos whilst in prison, Roxie meets a glamorous, double-murderess named Velma Kelly. The 2 girls get together to form an unusual nightclub act, which they hope will bring them lots of attention and into the public eye.
Desperate for fame, fortune and freedom, the women enlist the help of sleazy lawyer Billy Flynn. Both women will be hanged for their crimes if they lose their cases and are prepared to go to any lengths to escape execution.

This smash hit razzle dazzle musical, was created by John Kander, Fred Ebb and Rob Fosse and was originally shown in Broadway in 1975 and open in London’s West End in 1979.

There have been professional productions of Chicago all over the world, including countries Denmark, Norway, Finland, Sweden, the, Romania, South Korea, Brazil, Russia, Canada, Belgium, Austria, Ireland, , Czech Republic, Thailand and the United Arab Emirates,

News is yet to be announced whether Chicago will extend its run at the Cambridge theatre, but what's certain is that Chicago, is set to entertain crowds of theatregoers for many years to come. Chicago the musical in London is a sexy musical extravaganza that includes several show-stopping numbers such as "All That Jazz," "Razzle Dazzle" and "Class."
Tagged as
Features