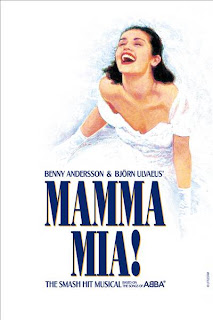 If you love flares, platforms, and dancing, then why not go and treat yourself to Mamma Mia! London. It’s the smash hit musical based on the songs of Abba that has been performing in London’s West End since 1999.
The story is told by cleverly integrating the timeless songs of Abba, including hits such as "Super Trouper", "Lay All Your Love On Me", "Dancing Queen", "Knowing Me, Knowing You", "Take A Chance On Me", "Thank You for the Music", "Money, Money, Money", "The Winner Takes It All", "Voulez Vous" and "SOS". The plot is fictitious and writer Catherine Johnson's sunny, funny tale unfolds on a Greek island paradise. On the eve of her wedding, a daughter's quest to discover the identity of her father brings 3 men from her mother's past back to the island they last visited 20 years ago. It’s one of the best love stories, which brings a tale of laughter and friendship, and every night everyone’s having the time of their lives which gets audiences jumping out of their seats! Mamma Mia! opened on April 6th 1999 at the Prince Edward Theatre. On the 9th June 2004, it transferred to the more lavish Prince of Wales Theatre and has been playing there ever since.
The Prince of Wales Theatre is one of the Delfont Mackintosh theatres and is situated in the heart of the West End, on Coventry Street in Leicester Square. It was initially established in 1884 and re-built in 1937.

Sir Cameron Mackintosh, the current owner had a major refurbishment of the theatre in 2004 and this is now the current home of Mamma Mia!

The theatre itself has many facilities including air conditioning, restaurant, cloakroom, and 2 bars. The closest underground is Piccadilly Circus or Leicester Square. There are wheelchair spaces available, infra red systems for the hearing impaired, guide dogs are permitted into the auditorium and disabled toilets are offered.
Due to the show’s success a film adaptation starring Meryl Streep, Colin Firth, Pierce Brosnan, Amanda Seyfried, Christine Baranski and Julie Walters was released in July 2008. It was also a box office hit!

It’s a real feel good show and is show is suited to everyone, if you like Abba, you will love Mamma Mia! Please note however, children under the age of 4 won’t be permitted into the theatre.

So if you want to get into the 70’s groove, Mamma Mia London is well worth a visit!
Tagged as
Features