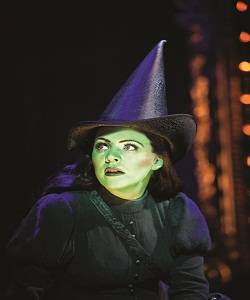 Apollo Victoria hit musical Wicked celebrated five years in the West End this week and its popularity is showing no sign of waning. The executive producer for the show in the UK, Michael McCabe, reveals that the core audience are "not all teenage girls - it is still very much couples in their 20s and early 30s". 58% of audience members are under the age of 35, which is a key demographic for producers to snare. This younger age group are finding themselves with more disposable funds and a tendency to 'live in the moment' as a counter effect of the current economic crisis. The show's producers are have been pleased to discover that the nature and feel good factor of the show leads this demographic to want to bring children, parents and grandparents back with them to enjoy it again. McCabe compares this repeat business to that enjoyed by other long running hits such as Les Miserables and Phantom Of The Opera. He credits it as playing a large part in the show actually increasing revenue as the years have passed, and knows it will play a part in keeping the show onstage in the future. December 2010 saw Wicked become the first West End production to gross more than £1 million at the box office in a single week, and the show is currently £2 million ahead of this time last year. Its current total box office gross for the UK run is £145 million.

The marketing of the show has successfully incorporated a digital media focus to help encourage a positive word-of-mouth, partly to counteract initial mixed reviews to the show. McCabe however also insists that at the end of the day the show's long-lasting appeal rests on its own merits. The musical focuses on the childhood of the Wicked Witch of the West, a character from the worldwide phenomenon The Wizard Of Oz. This brings a sense of familiarity to audiences but intrigues further as a new spin on the character unfolds as the new show's plot plays out. The themes raised throughout the production, of not judging a book by its cover, feeling socially outcast and the ramifications of cruel taunting resonate with a young demographic today. The success of TV shows like Glee where 'the nerdy kids fight back' and embrace themselves for who they are confirms there is a commercial appetite for the subject matter addressed in the musical. In fact crossover appeal from global phenomenon Glee has no doubt helped new audiences discover the musical. As well as songs from the musical being covered in episodes, the West End production's original lead actress playing Elphaba (the Wicked Witch), Idina Menzel, now plays Lea Michelle's mother in the hit tv show.

Crossovers like this help to saturate a show into the public's consciousness and can have a huge knock on effect on ticket sales. Once a show is seen as a successful brand a show's reputation will sell itself as new audience members don't necessarily want to take a risk on a show they haven't heard of if they are splashing out on a trip to London. The same applies from hotel concierges recommending shows for weekend guests through to booking agencies trying to set up packages for large groups - they are more likely to push a show they know has wide appeal that they have heard good reports about. For longevity in the West End, reputation and a good track record is everything. McCabe reveals “at the beginning of the show, I said to my American co-producers I hoped, in my wildest dreams, we would do five years in this theatre [the Apollo Victoria]. So, now, I’m certainly hoping that we’ll do ten - there are no signs of it slowing down.”
Tagged as
FeaturesCasting