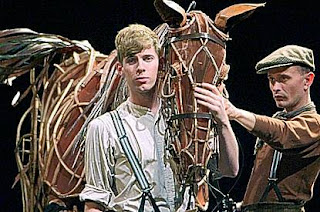 War Horse is the current stage production in London’s West End, based on the Novel by Michael Morpurgo. The story has been adapted by Nick Stafford, where it was shown for two extremely successful seasons at The National Theatre.Due to its overwhelming success and demand, the production transferred to The New London Theatre in the West End.You may have heard this is a puppet show – well you are right, but it is not just any puppet show. It is a heartfelt, deep story, and the incredible skilled work from the design team and puppeteers is outstanding. The puppets are wooden, and mechanically built to enable real-life movement, which you instantly fall into, and become emotionally attached.The story is set at the outbreak of World War 1, and based on a young boy named Albert from Devon, whose horse Joey has been sold to the cavalry and shipped to France. Joey is caught up in the heart of the enemy firing line, serving in both the British and German armies. Disease, death and fate take him on an extraordinary odyssey, serving on both sides before being alone in No Man's Land. But Albert simply cannot forget Joey, and, still not old enough to enlist in the army, he embarks on a dangerous mission to find and bring him back to Devon.

The show has really been a phenomenon, and from starting in 2007 at the National Theatre, has now gone on to West End and Broadway in 2011. Toronto, Canada is planning to have its production open in 2012. The London and Broadway production has won numerous awards, including Best Direction of a play, who are Marianne Elliott and Tom Morris. The Handspring Puppet Company, won awards for their outstanding design and role in the play where they received an Olivier Award, Evening Standard Theatre Award and London Critics’ Circle.Even if you are not into history or puppets, this show will not disappoint. You are immediately drawn to the fascinating work of the puppetry, but you soon ignore the fact they are puppets, and you fall in love with the characters through this passionate story.

The New London Theatre is located in Soho, just a short walk from Covent Garden. With an ‘easy to get to’ location, and a theatre which has a number of facilities, War Horse is most certainly a show worth visiting, and not to be forgotten.
Tagged as
Features