Following a sell-out world premiere at the Royal Court Theatre in 2009 that captured the hearts of many, Roy Williams' Sucker Punch is set to return to the London theatre stage for a brand-new Off-West End revival at the Theatre Royal Stratford East. The highly-anticipated return of Sucker Punch will be directed by Roy Alexander Weise and is set to take the London theatre scene by storm. Be sure to grab your tickets early to secure the best seats at the Stratford East and get ready to be 'hit with the left' and 'jabbed with the right' as this compelling tale on professional boxing captivates you from start to finish.

What is Roy Williams' Sucker Punch play about?

The Sucker Punch play by award-winning playwright Roy Williams is set in 1981 in Margaret Thatcher's South London. It follows Troy and Leon, two best mates who are struggling to find their purpose in a world plagued with skyrocketing unemployment and perilous racial divides. They soon start going to Charlie's gym where they find solace in the exquisite art of professional boxing. Will they finally be able to find where they belong through this merciless new hobby? This electrically-charged play explores the life of a young black man in 1980s London and dares to ask the question: How can you fight the system when it's designed for you to fail at all costs?

About the playwright Roy Williams

Born in the London borough of Fulham and raised in Notting Hill, it may seem like Roy Williams lived a life of privilege, but he, in fact, knows what it's like to struggle, making his play, Sucker Punch, all the more authentic. Having failed in school and dropping out at the age of 18, Williams worked at a warehouse and at McDonald's before he finally pursued a degree in theatre-writing at Rose Bruford College. His best-known staged works include a contribution to Sixty-Six Books at the Bush Theatre, No Boys Cricket Club at the Stratford East, Clubland at the Royal Court Theatre, Sing Yer Heart Out For The Lads at the National Theatre, Fallout at the Royal Court Theatre, Baby Girl at the National Theatre, Starstruck and, of course, Sucker Punch. Roy Williams has won the prestigious Alfred Fagon Award twice for his 1996 play Starstruck and again in 2010 for Sucker Punch. He also won the Evening Standard Award for Most Promising Playwright for his hit play, Clubland.

The new Stratford East run of the Sucker Punch play marks 10 years since the piece was last seen on the London theatre stage. The 2009 West End Royal Court Theatre run was a box office smash and tickets for the East London run of Sucker Punch are subject to high demand. Don't let disappointment hit you with a sucker punch, book your tickets for Sucker Punch at the Theatre Royal Stratford East today to guarantee the best ticket prices while stocks last!

This production contains strong language and violence. Recommended for ages 14+.

Valid for all performances. 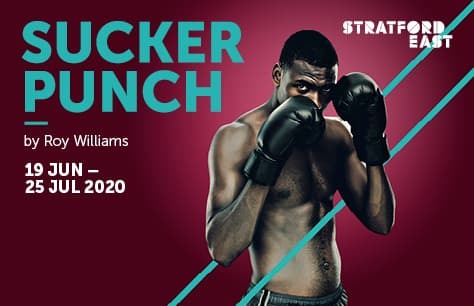 Roy Williams’ seminal play Sucker Punch is set to make a revival as part of the new season announced by Theatre Royal Stratford East and will mark 10 years since its premiere at the Royal Court Theatre in 2009. So, be sure to book your tickets or risk waiting another decade for a revival of this Olivier Award-nominated play. The production will begin on 19 June 2020 and end its run on 25 July 2020.