After it was announced that Sleepless A Musical Romance would be among the first shows in the UK to reopen this August with socially distanced performances, the production team have now released more details on how they plan on keeping the show safe and COVID-compliant, particularly when it comes to daily coronavirus testing for the cast and crew backstage at the Troubadour Wembley Park Theatre. Get the full scoop below plus new casting information.

After being forced to postpone its world premiere to late August, Sleepless A Musical Romance is set to rise triumphant with socially distanced performances and now on-site coronavirus testing for the show's cast and crew!

How will the Sleepless musical COVID testing work?

The future of COVID testing is here! Beginning on 25 August when the show open's for previews, the venue Troubadour Wembley Park Theatre will be testing the cast (including Jay McGuiness and Kimberley Walsh), musicians, backstage crew, and in-house theatre staff on a daily basis during rehearsals and throughout the entire show's run.

The accurate new COVID-19 test features FRANKD (Fast, Reliable, Accurate, Nucleic-based Kit for Covid19 Diagnostic Detection) technology, which means it does not require a laboratory and can deliver results in as early as 30 minutes to an hour after a swab sample was taken. Results are sent directly to the cast, crew, and staff via a newly developed, secure application.

A word from the Sleepless in London production team

On behalf of the producers of Sleepless, Encore Theatre Productions, Michael Rose and Damien Sanders said: “We are so excited to be leading the way for our industry and to be the first fully staged, indoor musical back up and running and we have been working around the clock to make it possible.

"Uppermost in our minds has been the safety of our cast and crew and this new fast and accurate technology from GeneMe allows us to lead the way once more with daily COVID testing of our cast and crew which can give everyone involved peace of mind and create a happy and safe working environment. This technology is currently being trialled by airports, government departments, sports teams and multinational companies in the UK and we are delighted to be the first to trial the system in the theatre and live event industry.”

In addition to the new testing innovation, the production has also revealed full casting for the highly anticipated world premiere of Sleepless. Set to join the previously announced Jay McGuiness as Sam and Kimberley Walsh as Annie are Daniel Casey in the role of Walter, Harriet Thorpe in the role of Eleanor, Jake Sharp in the role of Rob, and Tania Mathurin playing Becky.

Already making history with its special testing scheme and socially distanced performances, the musical Sleepless is also giving back to the community with the announcement of a special NHS Gala. Entitled A Night for Sleepless Heroes, the gala is to be held for, you guessed it, NHS and Care workers and will take place on Thursday, 27 August 2020. Due to overwhelming demand, this special performance has now sold out!

🎬 In case you missed it: "(WATCH VIDEO): Book of Mormon's Sam Toland posts song "HELL YES FOR THE NHS" on YouTube"

Sleepless A Musical Romance in a nutshell

Sleepless A Musical Romance is based on the original romcom classic, Sleepless in Seattle, which starred Tom Hanks and Meg Ryan. It also marks the second musical based on a Tom Hanks film that stars Jay McGuiness, who is best known for being a member of the British-Irish boy band The Wanted responsible for the 2012 hit song "Glad You Came" and follow-up hit "Chasing The Sun".

Sleepless tells of widower Sam who moves to Seattle with his ten-year-old son Jonah following the sad death of his wife. When Jonah phones in on a radio talk-show, he's forced to spill the beans on his broken heart and sleepless nights without his beloved and quickly becomes the most-wanted single man in America. It soon creates a great news story for journalist Annie on the east coast. Can Jonah bring this unlikely couple together on the observation deck of the Empire State Building? Accompanied by breathtaking choreography and a brand-new musical score, Sleepless A Musical Romance is just the ticket for a great cultural experience this August and September!

Sleepless will premiere at the Troubadour Wembley Park Theatre in London on Tuesday, 1 September 2020 with previews beginning on 25 August. The show is booking until Sunday, 27 September 2020. The show was originally meant to open on 24 March 2020 before the UK Government shut down theatres nationwide. The musical features a book by Michael Burdette and lyrics by new British writers Brendan Cull and Robert Scott. Audiences can also look forward to a 12-piece, razzle-dazzle jazz-le orchestra!

The world premiere of Sleepless is to be presented by Michael Rose, Encore Theatre Productions Ltd, David Shor and Marc Toberoff with the show's General Manager being David Pearson.

📧 Sign up for our mailing list to be notified as soon as Sleepless A Musical Romance tickets become available with us so you can be among the first to book your tickets! 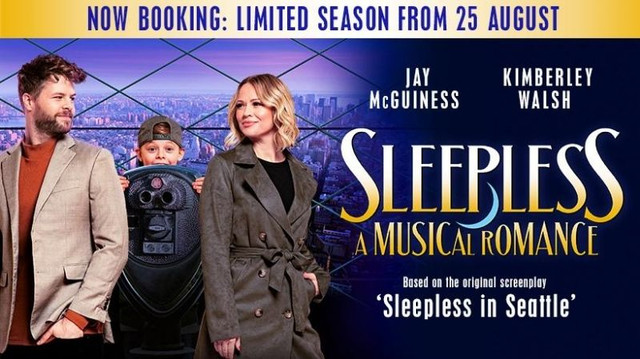 More information about the FRANKD test

The FRANKD test is a Nucleic Acid Amplification Test (NAAT), which is recommended by the WHO for testing for SARS-CoV-2. FRANKD has been shown to have 100% specificity and 97% sensitivity for detecting SARS-CoV-2 according to independent laboratory tests. FRANKD is available for sales across the EU and UK and carries the CE IVD mark for a diagnostic test.

Scientifically speaking, FRANKD tests for the presence of SARS-CoV-2 RNA. A nasal or throat swab is used to sample potential viral material in the same way as standard RT-PCR testing. However, FRANKD uses Loop-Mediated Isothermal Amplification (LAMP) technology. This means the FRANKD testing process is much simpler than the RT-PCR process as no RNA purification is required. This means any viral material from the swab can be directly tested, saving both time and cost. It also means FRANKD does not need much of the technical laboratory equipment of the RT-PCR tests, so businesses can test on-site using a portable testing machine.

To streamline the process, tests can be securely assigned and results shared to people’s phones using a free ID app from Yoti, which is already producing digital ID cards for the NHS. The Yoti app is designed to protect people’s privacy, with the company unable to track people or share their data without their consent.

Carlos Candal, owner and CEO of Global Marketing Group (GMG) who put the GeneMe and Yoti teams together to bring this solution to market, said, “Having known about Yoti for some time, once I saw how they can work hand in hand with FRANKD to offer a solution for the Global Theatre industry, I’m thrilled that SLEEPLESS will be the first to use the technology to help get theatres up and running again safely.’’

Robin Tombs, Co-founder and CEO of Yoti, added, “We are delighted to be working closely with SLEEPLESS to ensure that fast, regular, easy testing can be completed on premises with the ability to add results to the Yoti app of the tested person.”