It's beginning to look a lot like Christmas, at least in London Theatreland! The UK Government announced yesterday that the capital would be placed in Tier 2, meaning many eagerly anticipated shows including Death Drop at the Garrick Theatre and A Christmas Carol at the Dominion Theatre can go on as planned!

Though the 2020 holiday season is snow-thing like last year, there is still a handful of West End goodies that you can experience before Jolly Old Saint Nick comes to town! Check out our picks for the Top 10 West End Christmas shows to see this season below, with many shows offering special Black Friday discounts galore!

TV comedy legend and West End star Brian Conley fills the shoes of the miserly Ebenezer Scrooge in this star-studded, must-see Christmas classic set to be staged at London's Dominion Theatre. The COVID-secure event opens on 7 December and also stars Lucie Jones (Waitress), Cedric Neal (Back to the Future The Musical), Matt Willis (Little Shop of Horrors), Sandra Marvin (Waitress), and Jacqueline Jossa (Eastenders). Christmas is just not the same without Charles Dickens' beloved holiday fable. Book by 10am 1 December to take advantage of this special discount offer on A Christmas Carol.

🎟️ Book A Christmas Carol tickets here for as low as £28.75 and up for a limited time only!. Pantomimes are a British Christmas staple and this year, the Garrick is set to stage a zany and festive production of Potted Panto from 5 December until 10 January to mark the Olivier Award-nominated show's 10th anniversary! Hurry and book by 30 November to get your hands on some low-priced tickets! Magic Goes Wrong was originally meant to dominate the Vaudeville stage this December but has instead been swapped with Mischief Theatre Company's hilarious improv production Mischief Movie Night. If controlling the fate of thespians on stage à la Showstopper! The Improvised Musical is your cup of tea, then Mischief Movie Night is another brilliant chance to laugh yourself silly! The show opens 9 December.

English National Ballet's 70-year tradition of The Nutcracker lives on at the London Coliseum this Christmas with Nutcracker Delights! Get into the holiday spirit with this sugary sweet confection featuring the iconic score of Tchaikovsky and 50 talented dancers. 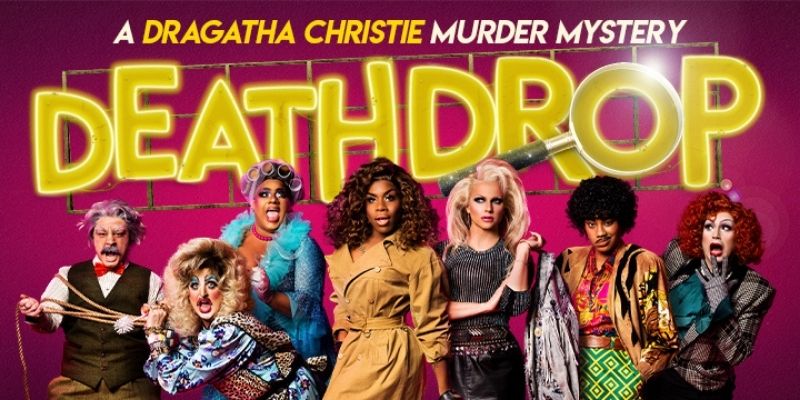 Death Drop: A Dragatha Christie Murder-Mystery
BLACK FRIDAY OFFER: Save up to £21.50

Courtney Act and Monét X Change are set to end this West End drought this Christmas and slay the stage with their upcoming whodunnit play Death Drop. The two popular Drag Race alums are to be joined on stage by Anna Phylactic, Kemah Bob, LoUis CYfer, Vinegar Strokes, and Holly Stars. A crime scene has never been so draglicious. Book the last remaining tickets to this fiercely funny, savage, and shady new production now before they all get snatched up and save up to £21.50 when you book by 1 December!

Adam Kay is back for a new festive treat as he digs into his diaries for a hilarious inside look behind the blue curtain this December and January. Dubbed a love letter to all our hardworking NHS workers who spend their holiday time on the frontlines, this new live production is as heartwarming as it is funny to the core. Book by 30 November to guarantee the best prices for this new sure-fire hit at the Palace Theatre. The Comeback
OFFER: No booking fees when you book by 2 Dec!

Winning comedy duo from The Pin, Ben Ashenden and Alex Owen, present just the upbeat, feel-good West End show you need to get you through the holidays! Packed with bittersweet nostalgic moments, touchy feelings, and head-spinning escapism, The Comeback is bound to have you bursting with laughter. Don't miss it at the Noel Coward Theatre from 8 December 2020 to 3 January 2021!

🎟️ Book The Comeback tickets here from as low as £10.

The Great Gatsby
BLACK FRIDAY OFFER: Save up to £35 on tickets!

Gatsby's Mansion has re-opened its doors for an unforgettable masquerade and you're invited! Immerse yourself in the spectacular world of F Scott Fitzgerald and get ready to party like it's 1929! Featuring flowing cocktails and champagne at the coolest soiree in the West End, The Great Gatsby immersive theatre experience in the heart of London is just the ticket for a fabulous night out on the town. Book your tickets for The Great Gatsby immersive now for Black Friday and save up to a whopping £35!

From the same producers that brought you the surprise smash-hit of the summer West End Musical Drive In and later the West End Musical Brunch at Troubadour Meridian Water comes a new festive production entitled West End Musical Christmas LIVE at the Palace Theatre in London! The holidays just aren't the same without a celebration of all things musical theatre! Starring some of the hottest West End stars of our generation and featuring a whole host of fabulous special guests to join them, you can be sure this holiday season event will rock your world!

The Vivienne's Christmas: Up to Snow Good

The Vivienne, best known for becoming the first-ever winner of RuPaul's Drag Race UK, is bringing a brand new Christmas variety show of tomfoolery galore to London's Appollo Theatre, home of Everybody's Talking About Jamie that once starred Drag Race's Michelle Visage and Bianca Del Rio. On for just one night only, tickets are expected to sell out fast. Grab the last remaining tickets for this one-off production now whilst you still can!

BONUS: Check out what movies are playing at The Drive in cinema in London this Christmas, including such classics as Home Alone, It's A Wonderful Life, and more!